I plan to take a 2-month-long hiatus from game design to work on some professional stuff.
When I return, I will finish the other game I worked on this summer (that's right, I almost submitted TWO games to IFCOMP)

This game will feature some very unusual mechanics for a text adventure game, namely:

- You will not be able to move in any cardinal direction
- the "map" will be laid out in an even more confusing way than Tingalan
- there will be no way to lose, and only one way to "win" which can be done at any time. You play till you think you're done

The map stuff is mildly terrifying but with a feature list like this I am excited.
Top

So where is Lost Coastlines? i mean...where is the download link to play? I looked on the main Adrift site/Games and couldn't see it there. Is it still WIP or finished?
Top

It's very sad.
After IFCOMP 2018, I realized that I would only be able to work on, and submit, ONE game for IFCOMP 2019...I wanted to put all my energy into one game. I had two options: Skybreak (A sci-fi game) and this (which is sorta a surreal exploration game). I initially chose this...but I suffered a catastrophic computer failure. The game is locked up on a failed hard-drive, and I'm making skybreak instead.

I will probably return to this game someday, the initial idea is so good that I can't pass it up...but it might be years away.


Skybreak is gonna be awesome though
Top

I'm still in mourning and will never be less sad.

Lost and sad ones. On a coast somewhere.
Top

Really funny you mention that, because the SAME EXACT mechanic is in Skybreak (because I like the mechanic and it works in basically any surreal game). The mechanic is pretty simple: In addition to all the slightly more "normal" trade goods you pick up as you wander the universe, you also inexplicably find like 17 varieties of beetles. There are only a handful of places where they are useful, but in those places they are VERY useful. So it's like a divine epiphany, you're finally like "oh wow, I finally found the place where beetles are relevant!"
Top

there are no handsome silk-pulling monks though. I mourn their delay.
Top

Today was a beautiful summer day, and so was yesterday, and it put me in the mood to work on this game again for the first time in almost half a year.

The previous version of "lost coastlines" was utterly toasted thanks to one of those nasty hard-drive failures, but forunately I saved the most sophisticated bit, a procedural location-naming/object-populating system, as a module. I decided to start over.

Initially, I didn't think I'd make this game in adrift, and my conviction in that regard was fortified after I lost the Adrift module.

...now, I've decided for no other reason than the sheer fun of making a totally unstandard IF/CYOA game in Adrift, I MUST make the game in this system.

It won't be done for a while because, despite my work on it the last few days, it really should take a backseat to Skybreak...but you might wanna move this thread to WIP
Top

To my knowledge this is the first "procgen" terrain generator done in adrift. It situates the player in a randomized graph of locations, and then builds out formations of landmasses, islands, seas, and the like. It then names them according to conventions that shift as you cross the map.

The "blank spots" are areas with hard-coded features, so that starting players are always assured to have a nearby fishmonger, temple, etc. 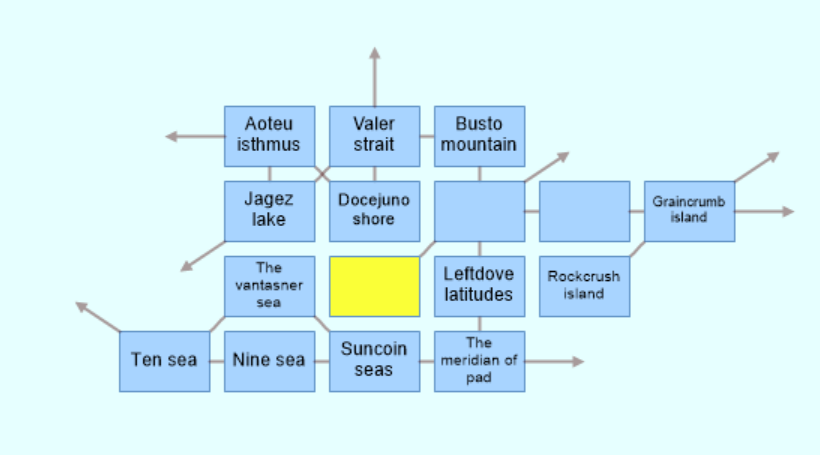 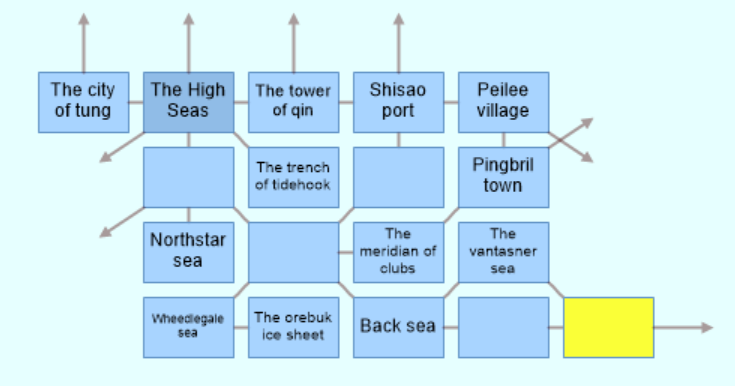 How did you handle the procedural generation? I thought about trying something a while back but couldn't figure out how to get ADRIFT to do it.
Top

There are lots of ways to do it. One way I could NEVER figure out was actually getting a task to just Rename the location as part of an event when the player entered that location.

I'm quite proud of how I did this, so on one hand I want to share it. On the other, it diminishes the magic of the world somewhat, so I'll put it in spoilers.

Thanks. That's quite interesting.
Top

I should add: my holy grail would be to somehow make it so ADRIFT just performs this action for an arbitrary location whenever a player enters that location. So the event would go
- Check to see if the player has been here before
- if not, decide what this location's x, y, and z are
- change the name of that location to match the x, y, and z
- pull objects into the room appropriate to x, y, and z


the lost coastlines method (and all working methods I've tried) involves making a special procedural task FOR EACH LOCATION, which for a game like this means hundreds of subtasks. I initially thought this would be quite easy to do a single operation, using properties, but I never found a way to do it.
Top

Great write up. I have experimented with a random loot system in the past and also renaming locations, which i've had to use a work around to get renaming a location (and alt long desc) to work by adding a location into a group where you can force property changes, changing the location name this way seems to be the only way to do it, the built in method does not work sadly its broken.

How did you action the name change? with groups also or another method?
Top
Post Reply
28 posts