Playing stories on your phone (Android)

Playing stories on your phone (Android)

Has anyone tried using this IF game runner? Fabularium (on the Google play store)
The latest update is supposed to be able to run Adrift 5 games as per his update notes ...

★ Many bug fixes for the Bebek (ADRIFT 5) interpreter. Bebek should now be capable of playing any game you can play on the official ADRIFT 5 Runner. Multimedia support (including an automap window) and performance optimisations will be added in future releases.

I haven't tried any Adrift games as yet but have been playing others and it runs them quite well.
Top

Re: Playing stories on your phone (Android)

That was interesting! So I have just attempted to play three ADRIFT 5 games on Fabularium. I tried two blorb-files but they wouldn't run and then I tried a taf-file (Beginner's Cave), which ran. So it seems that the game has to be a taf-file for it to work.

The basics of the game seemed to work fine (walking, examining, simple puzzles etc) but I quickly ran into ADRIFT errors and other bugs, so the game was unplayable unfortunately.

Re: Playing stories on your phone (Android)

Fabularium has just been updated today, so I wanted to report, that the ADRIFT 5 interpretter is working much better now. Now it plays both .taf and .blorb files including graphics and sound! ( I cannot get the graphics to work though, but it may be due to too little memory on my phone).

The only V5 game I am aware of not being playable is Beginner's Cave. All the other V5 games I have tried appears to be working very well. For some games, you may have to change the background color in the "fab.ini" file though, for the text to be visible. This can be done from within Fabularium, so that isn't a big problem. 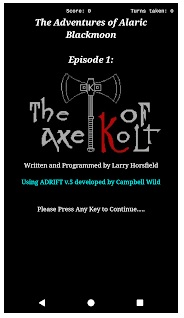