What is Inky Path?

Inky Path is the first literary magazine that showcases interactive fiction and provides readers with the tools to create their own game. It is about fostering a community of thought and discussion around IF works, seeing pieces for more than their entertainment value, and providing greater exposure of IF to the literary world.

What are you looking for?

We are looking for talented IF writers like yourselves to submit your interactive fiction to the site. There can't be a literary magazine without submissions, so we welcome everyone to bring forth their best work!

It's fine if your work is published elsewhere. You can also submit excerpts or the beginnings of pieces if you want. We welcome pieces of all lengths, types, and flavors. Bring us your best hypertext historical fiction, or parser-based paranormal romance. Or get even more experimental and send in some multimedia medley that defies all convention or classification. Have fun with it.

Check out the submission guidelines for more info on submitting. We are accepting year-round.

NOTE: We are also currently looking for more readers and graphic designers to help staff the magazine. Click here if you would like to know more about becoming part of the staff.

How can I help?

Since this is a relatively new publication, please, spread the word! Even if you are not personally interested in submitting, pass on the info to someone you know would love to. Since this really is the first of its kind, I'm hoping that it will succeed--I think it's something that the IF community has needed for a long time.

If you want to help fund the project, we also accept donations .

Thanks everyone! Please submit your work and share with friends! For questions, comments, etc. you can reply here or email the mag at inkypath[AT]gmail.com.

becoming part of the staff.

Am I right in assuming you mean pro bono? If so, why bother with resumes?

What are your experiences with InsideADRIFT and SPAG? The previous issue of InsideADRIFT (#41, 2 Feb 2012) was explicitly interested in this subject of interactive fiction for literary quality (particularly focusing on flash fiction) that Inky Path identifies as its goal. That is, I don't think you're exactly right in calling Inky Path a first or even the first of its kind.


providing greater exposure of IF to the literary world.

I have only seen two announcements: at the ADRIFT Forum and intfiction.org, and assume there are others. What advertising are you doing other than pro bono crowdsourcing word of mouth on interactive fiction fora?

What is "the literary world" to you? Are the writer/reader audiences you presume your publication will connect solely the ones listed under "linkage" on the Wordpress site? Will Inky Path be listed on Duotrope, Ralan's, or other literary publishing lists?

I'm sorry I have so many questions. I'm not exactly Andrew Plotkin or David Whyld, but I'm pretty into both interactive fiction and literature. That said, I don't know anybody listed on your staff page, so I have no idea what experiences or ideas you're coming at this project with.

As someone who has been the editor of a previous project with the same goal that failed and a repeat contributor to other projects (like SPAG) with similar goals that seem to have failed, I feel like the project as it's being pitched is something that has been tried before and will fail. That would be a shame; my involvement with the previous projects should indicate pretty clearly I think it's a neat idea. I'd like to see it succeed, but as a space to read and discuss interactive fiction, it seems it's redundant with the various IF forums, archives, and blogs (esp. Planet IF) where authors are already producing work for free. As a space for writing IF, Inky Path seems only able to point readers to other tools. This is good for us because we want people to >X ADRIFT and >GET IT, but ADRIFT isn't visible on most of the site. So I'm not really sure what is it that it's offering authors they haven't already got?

As far as the Inky Path sites: on the Wordpress site, ADRIFT is missing from your "Read IF" link and your "linkage" section and should be added. On the Wix site it's not immediately apparent enough one can scroll left on the banner and see ADRIFT. The white on white for the numbers in the lower left is also an unfortunate choice, as are the numbers themselves since they seem to imply a hierarchy with Twine in 1st and ADRIFT at 10th of 10. The systems you intend to make available for your audience should be displayed in a way that gives them all equal opportunity and visibility without suggesting hierarchy. At the very least, the arrows pointing away from Twine when the site loads should be more visible so it's clear a person can click to go left.
Top

why bother with resumes?

We're not asking for resumes, just a short letter on the author's previous experience and why they'd want to join. I wouldn't want anyone joining who wasn't really interested.


What are your experiences with InsideADRIFT and SPAG?

I've seen them. It seems that we have similar goals. The difference is that those sites seem to target others in the IF community. Inky is about bringing a new group of readership to the interactive fiction world--a group of people not interested explicitly in IF, but in reading good stories. This is why Inky sets itself up explicitly as a literary magazine first and foremost, and focuses on teaching beginners the ropes, including how they can make their own programs. Like I said before, it's similar to what has been done before but also stands apart in a lot of ways.


I have only seen two announcements: at the ADRIFT Forum and intfiction.org, and assume there are others. What advertising are you doing other than pro bono crowdsourcing word of mouth on interactive fiction fora?

There have been other announcements over at various forums (ChoiceofGames, chooseyourownstory, Adventure Cow, etc.) Since this is also about bringing in new readers and communities to interactive fiction, I've contacted twenty or so editors that I know do link sharing on their sites. I hope to get an announcement up on CRWROPPS when it's off hiatus, and with donations can hopefully get classifieds on widely-read lit mag sites like The Review Review or Poets & Writers.

As to your other question, we're already listed on Duotrope (https://duotrope.com/market_13827.aspx). Are we open to posting on other databases or sites? Of course.


What is "the literary world" to you? Are the writer/reader audiences you presume your publication will connect solely the ones listed under "linkage" on the Wordpress site?

To me the literary world includes but is not exclusive to IF writers and readers. It also encompasses the whole host of authors and readers in the world, esp. those involved in the publishing industry like lit mag readers and editors. The Linkage page is by no means exclusive, more of a general idea of the kinds of groups we want involved. It will certainly be updated as more magazines and IF sites might wish to link share.


I'd like to see it succeed, but as a space to read and discuss interactive fiction, it seems it's redundant with the various IF forums, archives, and blogs (esp. Planet IF) where authors are already producing work for free. As a space for writing IF, Inky Path seems only able to point readers to other tools. This is good for us because we want people to >X ADRIFT and >GET IT, but ADRIFT isn't visible on most of the site. So I'm not really sure what is it that it's offering authors they haven't already got?

Sure, there are lots of other IF blogs out there, and many programs have their own forums, etc. for users to promote their works. It's about bringing together the IF community by inviting authors from different programs and IF types to come together and to be a part of a showcase for the entire IF community. It's also about giving new authors the opportunities to share their work in a place where it won't be lost in an archive or database somewhere.

All in all, though, the IF community is very insular right now. As one who finds myself involved on both sides of the writing world--authoring in IF and regular literary publications--I thought that something really needed to be done to pull these two worlds together. There are a vast wealth of people (I know because I was one of them) who would be very interested in IF except they don't even really know how to begin. They want to read good IF stories, they want to learn how to make their own, but might not even know what a parser is or the difference between Choicescript and Inform.

I just did a quick search of "interactive fiction" and immediately I see the IFArchive, IFDB, then links to some specific programs like Inform and Adrift. If I was just a curious passer-by that would probably be the end of my journey. There's a vast wealth of other resources out there, but unfortunately most are targeted towards specific programs, users, or just those who already know all about IF.

Yes, you're right that there are some changes to the site that ought to be made. I've been meaning to revamp the whole "How-to" part of Inky anyway, and now I've got some time on my hands, so...

I know that you've clearly thought a lot about this and that you do want it to succeed. I hope I've (at least in part) helped made clearer the goals of Inky and its place in the IF/literary community. I'm always open to suggestions, comments, questions, etc. so feel free to send more my way.
Top

We are now accepting guest blog post entries for Inky Path's blog. If you want to write about the state of writing, fiction, or interactive fiction today, or post any reviews for IF pieces, this is the place you can do it! We will also accept re-posts of entries you might have already posted to your own blog.

We are also still accepting submissions for Volume 1. Remember that your piece can be published elsewhere, and we accept most types of interactive fiction.

For guidelines on submitting your interactive fiction piece, or your blog entry, check out the submission guidelines here: http://inkypath.wordpress.com/submissions/

Hope to be hearing from you soon!

One last update for now:

Just wanted to let everyone know that Vol. 1.1 is officially released! You can check it out here.

We are now accepting submissions for Vol 1.2 (scheduled for release May 31st) as well as blog posts on IF (for more on that, see Inky's Submissions page.)

Volume 1.2 has just been officially released! You can read it here. 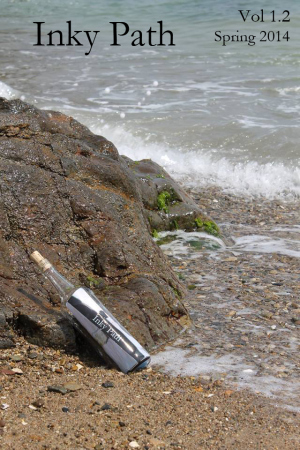 We've got some fantastic pieces this time around ranging from funny to whimsical to surreal, and in the spirit of last volume's quiz, we bring this quarter a small gamebook RPG in which you quest to find the "worldgates," or various pieces, from the volume. We've also got a shiny new domain name, http://www.inkypathmag.com.

I hope you enjoy, and we hope to see submissions from you soon.
Top

Just wanted to let everyone know that Inky Path has released its third volume, Hidden in Shadows. You can access it here.

We are now accepting pieces for Volume 1.4, and will be accepting submissions through the end of October. We'd love to see your work! Visit our submissions page for more info: http://inkypathmag.com/submissions/