Want to just chat amongst yourselves? Then this is the place when IF and ADRIFT are not the topic. Please keep your posts family friendly.
Post Reply
11 posts • Page 1 of 1

Since Mizal wanted my input on AI Dungeon 2...

I'm calling this an indirect win for CYS (And me personally) since the designer used CYS stories (and a lot of mine) as a base for his AI and these type of results are frequent enough in AI Dungeon that they're posting about this going on: 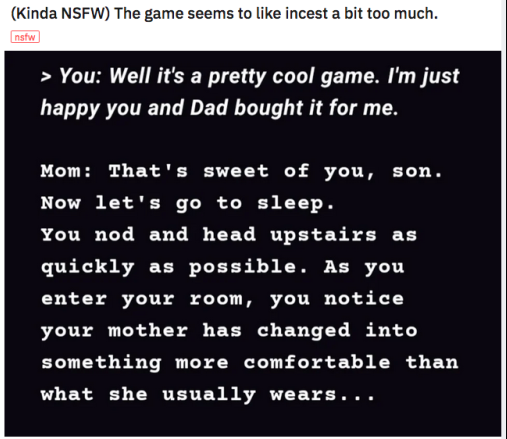 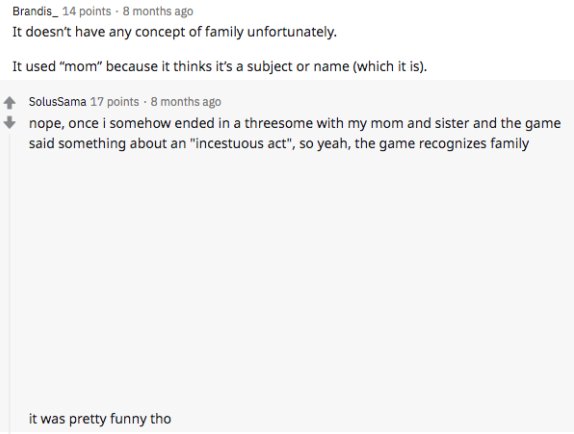 Now I know Mizal mentioned they did something with the AI probably trying to curb it's gravitation towards incest, but even posts at least a month ago say it's still going on 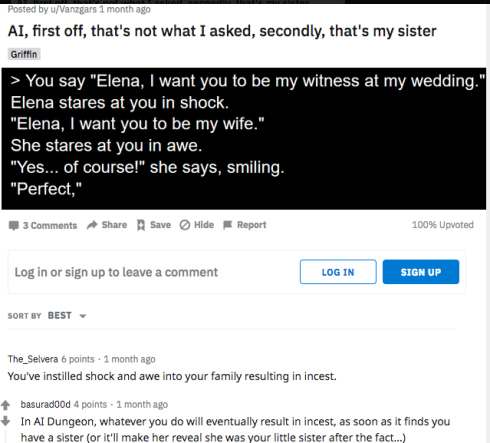 Incest speedruns in TVtropes for this thing.

Like someone else said in the discord, AI Dungeon truly is the real child of CYS.

I reinstalled AI Dungeon to look at some of the new features. It's changed a lot since when it originally came out and funnily a lot of the changes are moving away from the total freedom it was pitched as and into premade scenarios and worlds.

But uhhhh yeah, can confirm it goes from zero to sexual still...

I'm going to generate a few more though, because I have a hunch picking female characters will result in this sort of thing more often. With all the data Nick Walton is collecting I'm pretty sure he's pulling the more popular inputs from players and feeding it back in somehow too. It can't all be just for future blackmail material.

@Po_Prune can you split the last couple of posts off into an AI Dungeon thread?

Anybody sharing these needs to keep any bizarre results non explicit of course. But if we're treating this like actual IF now like the XYZZY awards seem to want, the primary puzzle seems to be figuring out how to keep it from going R rated on you.

At this point I consider AI Dungeon to be an EndMaster story fanfic generator based on all the names from my stories that people say keep popping up.

Can you change the title of your OP? Still looks like this is an XYZZY thread.

Oh but I guess if anybody's gonna make a serious attempt play the dang thing it better be soon.

Recently we’ve learned that the server costs incurred for both the Griffin and Dragon models are higher than our total revenue. Nobody has ever deployed AI models this powerful before, and it requires extremely expensive hardware. If we don’t make changes to cover the costs of that hardware soon, AI Dungeon will not be financially viable.

I doubt there will be a free version much longer, or else he's going to lobotomize the free one even further.

Although I was already burning out after messing with it a couple of hours yesterday. It's hard for me to maintain interest for more than a session or two at a time. The amount of resending of commands and editing of responses I have to do to get a story that isn't completely nonsensical kind of wears thin. My second princess run contained references to the internet, and the usual annoying thing of people getting their throats slit or bring beheaded and continuing to be alive.
Last edited by Lumin on Fri Oct 09, 2020 11:56 pm, edited 1 time in total.
Top

I'm trying, but I'm not quite sure how to change the topic title.
D-Day in progress 86Kb (Slowly drifting)
October 31st: 93Kb (possible entry for IFComp 2021

It has to be edited manually post by post I guess, but it should be good from here.
Top

The princess scenario is the worst and most boring thing. All these canned scenarios are. "You are Princina, a princess living in the kingdom of Larion. You wake up in a big feather bed and hear clamoring outside your door. A knight rushes in to tell you that" is always the starting prompt and it always ends up with the king being murdered or a group of bandits right outside the castle that it's the princess's job to deal with for some reason. Now I'm no historian but I don't think it worked like that! If only I'd saved the weird porn one since it was apparently the engine straining the limits of its creativity.

To be fair, I fed the same prompt to our Discord GPT bot a few times and got equally dumb results. That prompt just sucks.

So this time I went with a custom one using a bit from Po's IFComp game instead, and we're off to a much better start now.

Very good. Mmm, that gives me an idea - Thanks!

Well a minor update on this or major one depending on your viewpoint.

Here's a big article that gives the play by play of the problems. Sort of figured Games Workshop would have sued them first though.

I'm mostly just confused that anyone was surprised by this, or by the general degeneracy. Even the dev being Mormon is no excuse. Have people really learned nothing from the existence of the entire rest of the internet?